Laughter and Music at the Deerfield Embassy Suites

The Deerfield Embassy Suites recently hosted an amazing fundraiser.  It was called LAF for LRF (the Leukemia Research Foundation).  The LAF just stands for “laugh”.  It was an evening of music and comedy and raised money for a great cause.

A few months ago my friend Andrew Pond, a founding member of Eclectic Full Contact Theatre, contacted me.  He said he’d been asked to host the fundraiser and he was hoping Felix and Fingers could be involved.  I definitely felt honored to be asked, and told him I’d help out in any way I could.  It ended up being a very rewarding experience. 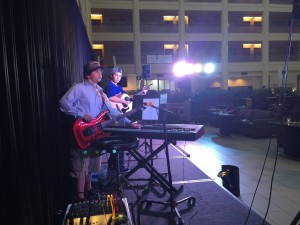 Basically, families would buy tickets of various tiers and came to the Deerfield Embassy Suites to be entertained and to be few great food.  The food didn’t disappoint.  They had made to order fish and pork tacos among other delicious fares!  Before the show started, we ate and listen to the stylings of Another Note, a band made up of three kids.  They played everything from “Piano Man” to “Let it Be.”  They were definitely a hard act to follow. 🙂

On With the Show

This was definitely one of the most fun shows I’ve gotten to play.  It wasn’t our typical dueling pianos show.  I did get to sing a few songs… “Let it Go” and a song from “Sesame Street.”  Don’t be jealous.  The folks at the Deerfield Embassy Suites sure weren’t!

The rest of the show was comprised of various comedic acts and songs.  There were improv games featuring members of Eclectic Full Contact Theatre, a Batman vs. Superman tap dancing battle, and even a juggler who stood on a giant red ball while he juggles.  It was probably the most random assortment of acts ever comprised at the Deerfield Embassy Suites, or anywhere for that matter!

The Deerfield Embassy Suites was an awesome location for the event, and I’m very glad I was able to be a part of it.  If you are hosting a fundraiser or any other type of event, you’ll be amazed at what Felix and Fingers can bring to the table!  Reach out to us today!