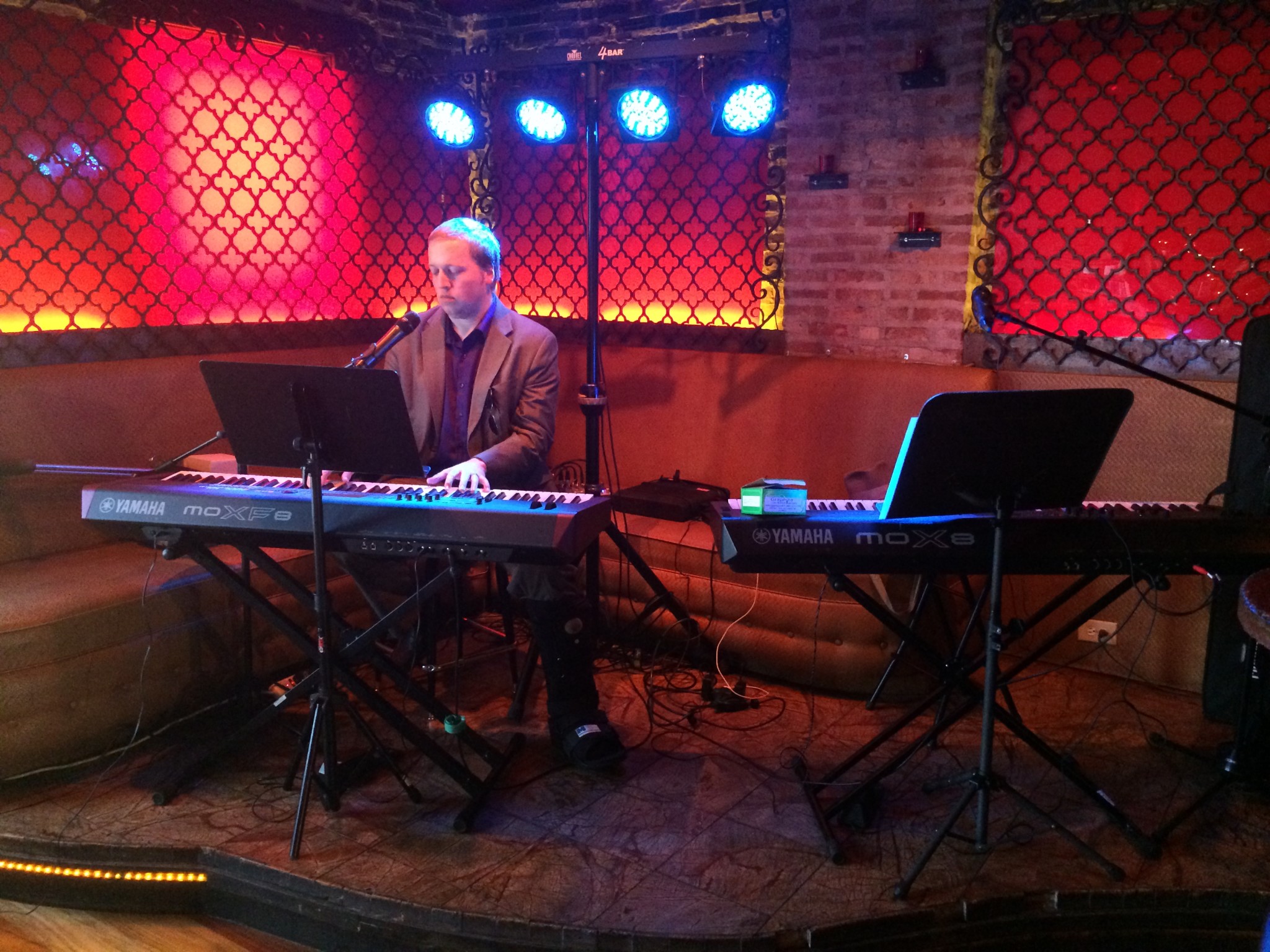 Felix and Fingers Dueling Pianos had their first visit to Potter’s Place (Naperville, Il) last week when a corporate client decided to host an event at this venue.  Admittedly, I was surprised that a high end corporate event would want to party at a Mexican Restaurant, but when I saw the space, I immediately understood why Potter’s Place is such a great venue!

The dueling pianos show was put in the upstairs bar, and from the second we started moving our gear upstairs, we were caught off guard by the metal work in the space.  Starting at the stairway there seems to be a tree constructed of metal “vines”, stretching all the way across the room and integrating into the wine glass racks, and even creating pedestals on the wall for the top shelf liquors.  I’ve never seen a bar like it, and considering it’s got to be one-of-a-kind, I’m guessing I never will again. 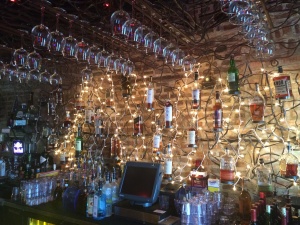 Bring on the corporate guests

We were set up and ready to go approximately an hour before the guests starting arriving via shuttle from a local Marriott.  Potter’s Place had prepared a buffet of quesadillas and mini burgers/sliders for the appetizers, which was so well stocked that most of the guests figured it was the main course.  After some speeches, our host announced that the main fajita course would be served, all of which was fantastic.

The bar set up is a bit tricky for live entertainment as you have an all too familiar issue…the long narrow floor plan makes it extremely difficult to interact with guests.  Luckily, Felix and Fingers Dueling Pianos has dealt with this a time or two before 🙂

Dueling pianos is a show that thrives on interaction.  This could include singing along, dancing, jokes, or as was the case this night: karaoke.  But regardless of the approach, Felix and Fingers takes pride in being able to read and react to an audience to deliver the best show possible, and after “Tony” had eagerly requested the microphone, it appeared that this group was there to sing and have a good time.

Where as most bands would laugh you off the stage should you request to sing along, dueling pianos will encourage it!  Though you never know exactly what’s going to happen or how the volunteer singer will sound, there’s nothing we as dueling pianists like more than to see our crowd involved.  Give us a song and we’ll pull up lyrics for you and play along.  It almost doesn’t matter if we know the song or not, we’ll follow the singer.  There are few better ways to engage a corporate crowd than to have the boss singing an eagles song, or getting a client on the mic for a country song or two.

It was great to see all the guests gathered around the bar taking turns on the microphone.  I’m sure they’re flying back to their hometowns with a ton of stories, laughs, and hopefully new business connections due to the environment that dueling pianos and Potter’s Place helped to cultivate.  And from Billy Joel’s “Piano Man” to Eminem’s “Slim Shady”, our audience was thoroughly amused! 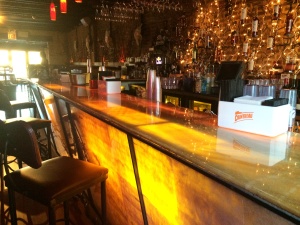 Final thoughts: Next time you’re in Naperville, check out Potter’s Place.  Definitely go upstairs and check out the bar.  I hope they do a ton of corporate events, birthday parties, Bachelor/Bachelorette Parties and the like upstairs, it’s difficult to find a cooler venue in the Chicago suburbs.  And add on Dueling Pianos and you’re bound to have an amazing night!

We eagerly look forward to our next visit to Potter’s Place.  And who knows, maybe next time you hear from us, it will be downstairs on the patio/beer garden where they host live bands every week.  If only Naperville was in the Northwest Suburbs so that I could go there every night!

Thanks Potter’s Place – see you soon!

Oh – Felix and Fingers in Chinese

Ever wonder what your name looked like in Chinese?  We do all the time!  One of the corporate guests were attending the event from China, and after we were told he would put us on “Chinese Twitter”, we asked him to write out names.  Here’s what it looked like.  Thanks mysterious Chinese man! 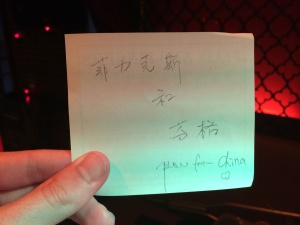 Felix and Fingers Writen in Chinese

Whether your event is in China or Chi-town, we’re willing to make it unforgettable!  Contact us here!