So, if you haven’t heard of Felix and Fingers by now, it’s a thing. This post is yet another example of WHY it’s a thing. Last Friday we played at the fine establishment known as “Broken Oar.” Clever name for a place on the river. The venue itself has a really nice “Key West” feel to it. Great outdoor seating/scenery, fun bar set-up inside, and lots of HDTV’s for sports games.

The Hawks game was on that night (that’s Chicago speech for Blackhawks- it’s a thing), playing for their tournament life in the playoffs. Obviously we’re rooting for them to win anyway, BUT, we were doubly rooting for them because playing for cheery, festive Hawks fans is more fun than playing for potentially angry/inebriated ones. Luckily, the Hawks pulled out the W in the third period, demonstrating yet again their need to re-up Patrick Kane’s contract. 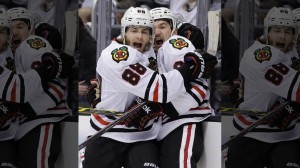 The best word to describe the atmosphere from then onward is simply “fun.” People were throwing out song requests (the new song to know is apparently “Diamond Girl”), laughing when they were supposed to, and most importantly having a great time at a great venue after a great Hawks victory!

So, whether or not you come for the food, the game, or the music, come to Broken Oar on Friday nights all summer long. We’ll see you there!