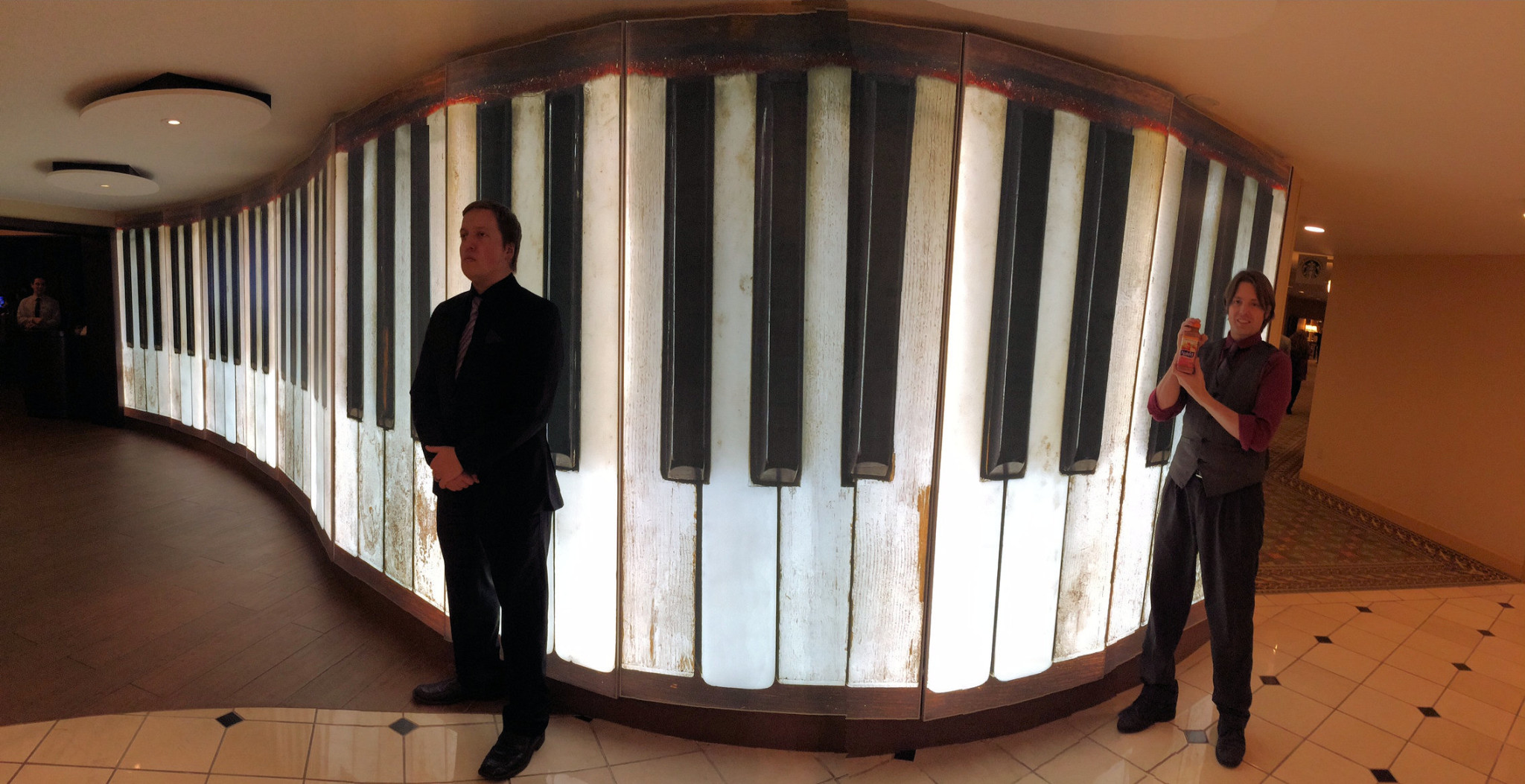 There was a lot of excitement leading up to my first trip to Nashville.  Finally, I’d visit the town which serves as the epitome of country music.  I didn’t grow up as a dedicated country fan, but my Dad would play it non-stop.  Over the years, it grabbed a hold of me to the point that I couldn’t wait to see Nashville!  My friends told me I could stop at any ordinary bar with live music, and hear the most amazing country talent that I’d be lucky to find anywhere in the entire state of Illinois.

Unfortunately, between work and travel, there wasn’t time for that.  But Mike Sherman and I did make time for visiting the Country Music Hall Of Fame And Museum.  We woke up early to finish a drive from Mt. Vernon, IL to Nashville.  We wanted to have plenty of time to explore the area before we started our own show at the Nashville Airport Marriott.

Pictures Of The Country Music Hall Of Fame Museum 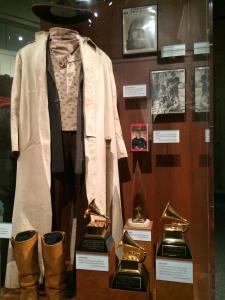 The very costume worn by Kenny Rogers in “The Gambler” video.

When we arrived, the newest addition to the museum was a featured area of Kenny Rogers.  If I had a dime for every time The Gambler Or Lucille has been requested from a dueling piano audience, I could buy that KitchenAid Architect Series II dishwasher, I’ve had my eye on.  Seriously, that’s a lot of requests.

Honestly, I didn’t get as much out of the museum as a more educated person may have.  There was a lot of informative reading material. Whereas much of my own personal experience amounted to quick glances and something like, “Don’t the wardrobe displays make the people seem small?”  I know that may let down a lot of die-hard country fans that are thinking I wasted an opportunity.   But honestly, there just wasn’t enough time.  If you’re a South Park fan, I can now relate to Cartman trying to take it all in at Casa Bonita as the police chased him down. 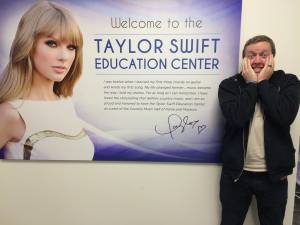 To potentially add to your further disappointment to how our time was spent, I’d have to say the exhibit that had us stuck in our tracks the longest was that of country star, (who wrote such hits as “Shake It Up” “Trouble” “We Are Never Getting Back Together”) Taylor Swift!  Here you can see Mike gushing over her exhibition. 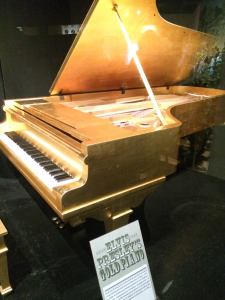 I did learn that many of the country stars seemed to be a bit conservative with their money.  Here is a piano made of Gold, that was played by the legendary pianist, Elvis.  And who can forget Webb Pierce’s amazing (to say the least) car.

As the clock was winding down on our free time, we picked up the pace a bit, so that we’d have some time to get some real Nashville food. 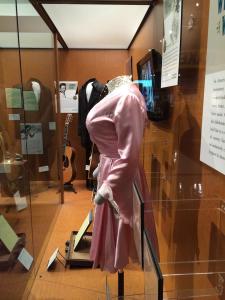 Black Suit worn by “The Man In Black.”

But before we left, I did get side-tracked by another attraction.  Here you can see one of the many suits worn by the Man In Black, Johnny Cash.

It was a $50, well spent.  But now it was time to eat.  We looked up several restaurants nearby, in an effort to find some good Nashville cooking.  Sadly, everything seemed to close around 2:00 or 2:30, so we headed away from the center of Music City, and finally found a great drive-thru restaurant. No sarcasm here… this place had great reviews, and some delicious comfort food.  And the service was superb.  This is also where we learned of the places that we should have visited if we had more time, or maybe even as a substitute to the museum we toured.

I’m not disappointed though.  Put my earlier sarcasm aside and I’ll tell you that it was genuinely a great experience.  My only disappointment is that we didn’t have more time.

How To Pull Off a Dueling Piano Show In Nashville 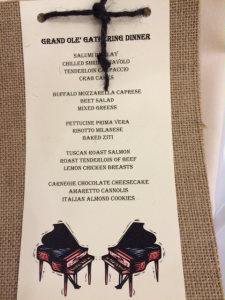 Look! The customized the menus for us. Dueling piano style and great food!

The conference room was beautifully prepared.  The catering and menu was top-notch.  If Mike and I hadn’t filled up on pulled-pork, mashed potatoes and mac-and-cheese, I know we would have enjoyed their meals.  With about a few hundred people, we learned that most of them were not from Nashville.   In fact, they were from all over the States, without any real specific group location.  From the start of the show, we asked how many people had ever been to a dueling piano show before.  There was a small applause, but the first round of requests seemed to provide further evidence that this was largely a “first-time” crowd.  Out of the first 15 requests that showed up on our stage.  6 of them were Piano Man.  While the remaining 9 also had many duplicates.  We had to remind the crowd that anything goes.

To capitalize the point we were trying to make we threw in a few songs that were outside the box.  The energy came in waves from the audience, but the show ended very strong.  And that last wave was a long fun ride.

You might think that being in Nashville (not just us, but the audience, as well) that we’d have received several country music requests.  That was not the case.  There was nothing geared towards complementing the aura of the great city we were in.  The mentality of many of the guests may have been more geared towards being at the Nashville Airport Marriott as opposed to being in Music City.

Just outside the Conference Room at Nashville Airport Marriott

And while we did play songs such as “Ring Of Fire,” “Folsom Prison Blues,” there really wasn’t any other country to be heard that night.  Not even “Rocky Top.”  But that doesn’t matter.  We gave the crowd what they wanted.  And that (unequivocally) amounted to such tunes as Snoop Dogg’s, “Gin & Juice.”

While earlier in the show, we needed to provide a bit more encouragement for singing along, the last half of the show didn’t require that at all.  For a corporate event, it was great to see the people letting loose and just having a good time.

As for our us; the show was a blast.  We always have fun.  And now that we have a new office in Louisiana, I suspect there will be more opportunities to visit Nashville, and you better believe I’m going to satisfy myself to a complete tour next time!

In the meantime, why don’t you plan your next corporate event with Felix And Fingers?  Take a look around our website, and then contact us.  Y’all Take Care Now, Ya Hear?