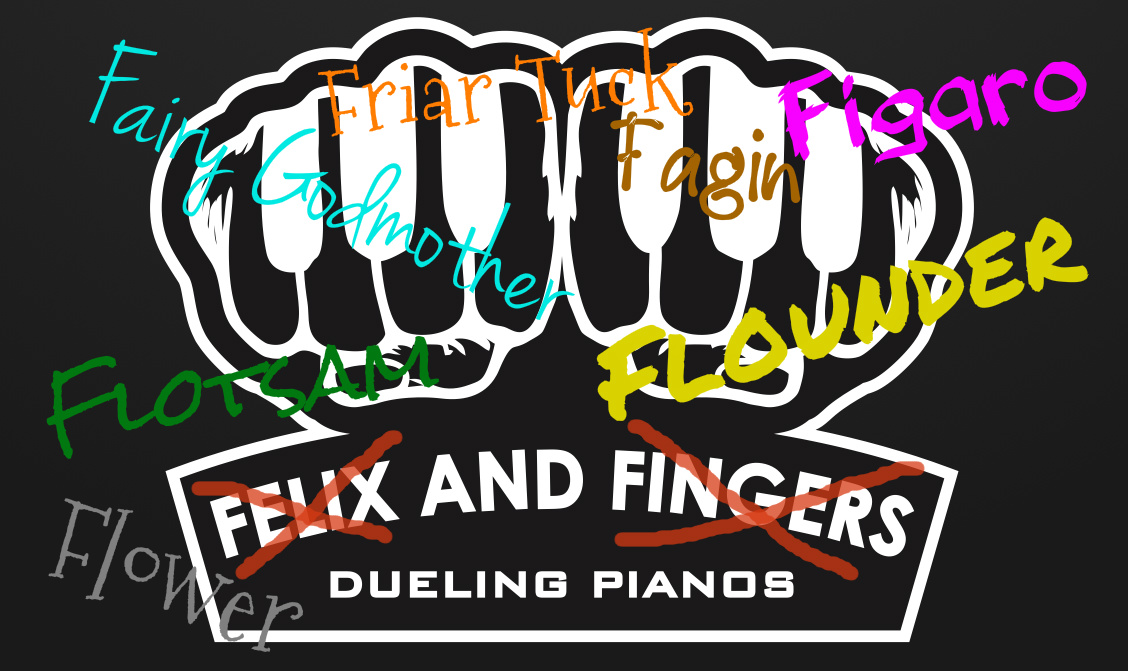 Ariel: Look at this song?

Wouldn’t you say that it’s got a good beat?

Chances are, you aren’t hiring Dueling Piano players to play a bunch of Disney songs.  Buuuuut, the best part about hiring Felix and Fingers is that we know some of everything!  We’ll play country, 80’s, rap, and top 40 tunes…  all within ten minutes!  I consider Disney music to be a genre of it’s own, and nobody loves singing Disney tunes more than I do!

As a dueling piano player, these are the five Disney songs that I get most excited about when they get requested (and for the record I’ve never been stumped by a Disney song):

It’s hard to find an animated song where an actor comes as alive as Robin Williams did in “Friend Like Me” in Aladdin. You can almost imagine him in the recording studio, dancing around, singing, and cracking everyone up. “Prince Ali” is a good one too, but this song is magical, in more than one way!

There’s nothing like a big choreographed number involving non-humans! Disney used them a lot in their movies, like “Be Our Guest” from Beauty and the Beast, and “Just Can’t Wait to Be King” in The Lion King, and they even used dancing mops once or twice, but this calypso themed song from The Little Mermaid will be stuck in your head all day! It’s catchy, and it’s probably the only Disney song I get to sing in a Jamaican accent! That and “Kiss the Girl,” which is definitely one of my favorite Disney love songs! 🙂

Why Should I Worry

This is an awesome song, from the less popular Disney movie, Oliver and Company. Not only is it a great song, it’s sung by the piano man himself, Billy Joel! It has everything that makes a song great, including the masterful effect of turning a dog’s howl into music. You can’t help but love the sly Dodger, based on the Artful Dodger from Oliver Twist.

Once Upon a Dream

This song as a classic, and not only because it was recorded for Sleeping Beauty in 1959. It was taken from the Tchaikovsky ballet, The Sleeping Beauty, and was originally titled, “The Garland Waltz” (though probably something more French sounding than that…). The ballet was written in 1889, so this song has been around for a long time, and like all waltzes, it’s hard not to start swaying back and forth while listening to it (or singing it)!

This is definitely my favorite Disney song to sing. This Lion King favorite is great on so many levels. Of course, it’s a great catchy song, like all of the songs on this page, however, the reason I love to do this is because of the voices! Nathan Lane, Matthew Broderick, and Ernie Sabella all have completely different sounding voices, so it’s a lot of fun to do my best impressions of them. It’s basically like singing a whole conversation to myself on stage!

Some honorable mentions go to: “Let it Go,” from Frozen (Don’t judge me. Okay. Judge me.), “You’ve Got a Friend in Me,” from Toy Story, “Everybody Wants to be a Cat,” from The Aristocats, and “I Wanna Be Like You” from the Jungle Book. And pretty much every other Disney song. I actually can’t think of a single one I don’t like.

We hope next time you’re at one of our shows, you’ll request one of these, and if you give one to me personally, I’ll play it IMMEDIETELY!  That’s my secret Disney rule that only YOU know about!  And if you feel like bringing Felix and Fingers to your next event for some music (Disney or non), contact us today!