Computer Rendering of the Reception Hall – Pear Tree looks at least this great!

We recently had the pleasure of entertaining at the brand new Pear Tree Estates in Champaign/Urbana IL!  Well, technically they will say we were the second wedding there, but we were the first live entertainment wedding band!  And wow, what a beautiful venue, so huge kudos to the Pear Tree Catering team for building such a great reception hall from the ground up 🙂

The performance was for the Kesler/Guzman wedding, and we had a blast.  They were a lovely couple with families to match.  Felix and Fingers (Mike Potts and Dave Radford for this one) were to provide ceremony music through reception dancing.

The ceremony went smoothly as the bridal party entered to Adele’s “Day Dreamer”, followed by the bride and Bruno Mars’ “Just the way you are”.  The officiant was fun and it’s always great watching a couple who can maintain a sense of humor during the ceremony!  30 minutes later, the guests moved to cocktails while the Dueling Pianos show got set where the ceremony had just taken place. 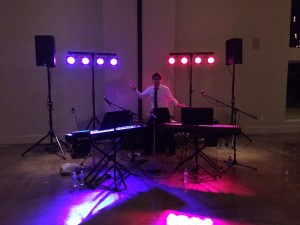 Per usual, dinner music was our background jazz show, followed by first dances, and then all request dueling pianos to begin the party.  Frank’s family was from Mexico, meaning we had a number of latin requests.  I can’t recall if I went into La Bamba or not, but we saved most of those requests to be DJed at the end of the show, at which point we realized how much better the Latin Dance culture is than the American club culture.  Granted, I make a living playing dueling pianos versions of Lady Gaga and Usher, but the latin rhythms just groove so much better!  Pear Tree definitely had a great first (or second) wedding reception!

As we packed up our cars to leave were were greeted by a couple of farm cats.  Of course, they needed to be named Felix and Fingers, and with every trip inside to grab more gear, I would come outside to find one of the cats had jumped in my car and was sitting in the front seat.  Unfortunately we didn’t have any room for new mascots, so after chasing them from the car for the final time, we closed up and started the drive home. 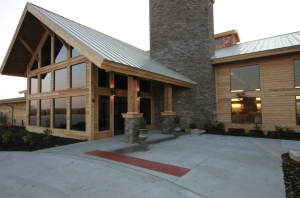 Welcome to the newest wedding venue in Central Illinois!

This incredible venue in Champaign is going to be a huge hit for the central Illinois weddings and we hope to bring dueling pianos back there as often as possible!  All the best to our new Pear Tree friends!